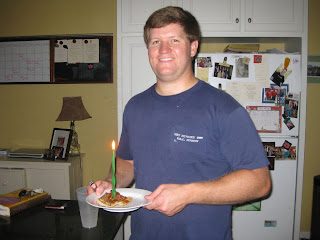 So yesterday was Scott's 28th birthday. That is his favorite pecan pie from Hoover Country Club that he had for his "birthday cake." I think that I get more excited about his birthday than he does, but as you can tell he humored me none the less. Before the pie, I told him that we could go where ever he wanted to for dinner, being that he was the birthday boy and all. And for those of you that know Scott Howell, this will not come as a surprise, but the only place he wanted to go was CiCi's pizza buffet, he was gitty from excitement about his place of choice. Let's just say is was a stretch for me to keep a smile on my face for that one. After Scott put down 12 slices of pizza and I was surviving on dessert, we were out of there and on to find his birthday present from his mom and dad. He was pretty excited, because a Big Green Egg was in his future.... 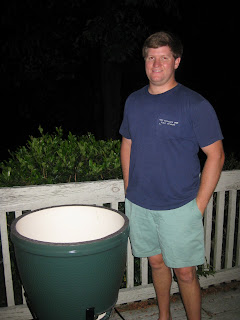 Very proud, isn't he?? Here is Scott already putting it together, but he needs his Big Green Egg partner in crime Brown (hint hint) to come help him put the rest of it together, so that he can get grilling on this monster!
My present for Scott was a long time coming, and I was pretty proud of it as well. There was a watch that had been passed down from Scott's grandfather to his dad and then his dad wanted to pass it down to him. So, I got it all spiffed up and gave it to him for the big day. (As some of you know there is another long story behind that, which can be saved for another day.) I was just so glad that he loved the watch and put it right on after opening it up! He loved that his dad wanted to give it to him, how sweet!
All in all for someone who really doesn't care about his birthday, he had a great day! Now the only thing left to say, is how do I top this one for next year!!! Love you Scottie!! 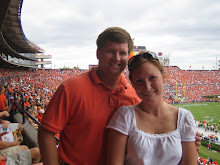